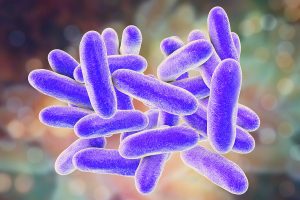 In the fall of 2017, an outbreak of harmful bacteria linked to the cooling mist at Disneyland in California caused 22 people to develop Legionnaires’ disease, resulting in one fatality. In December of 2018, a health official testified that Legionella bacteria in the water of the cooling tower was the most likely source. This frightening outbreak left many people seeking more information about just what Legionnaires’ disease is and how it is caused. Our goal is to help you understand Legionnaires’ disease and its causes, as well as how we can help if you suspect contamination of this bacteria.

Where Does Legionnaires’ Come From?

The Legionella bacteria is typically found in bodies of freshwater such as lakes, streams or rivers. It only becomes a health concern if found in large quantities within these systems or if it is found in man-made water systems such as hot tubs, sink faucets, air conditioning systems, fountains, water features, or hot water tanks. Legionella bacteria can cause health issues to humans once it is in the form of water vapor. Once it enters the water vapor, it can be inhaled by humans which can potentially lead to legionellosis. In more rare cases, Legionella have been transmitted to the lungs from drinking water. This happens when an individual aspirates on drinking water and typically only occurs in individuals who have difficulty swallowing.

Legionellosis is the name given to the diseases contracted from the inhalation of Legionella. The two diseases that fall under the Legionellosis category are Legionnaires’ Disease and Pontiac Fever. The lesser of the two ailments, Pontiac fever, consists of more mild, flu-like symptoms as a result of exposure to Legionella. According to the Mayo Clinic, Pontiac fever doesn’t infect your lungs, and symptoms usually clear within two to five days. The more severe of the two diseases, Legionnaires’ Disease, can result in much more severe reactions and may even be fatal.

What is Legionnaires’ Disease?

After a few days of persistent illness, many patients often see more severe symptoms. As the disease worsens, a new set of symptoms often appear, including:

If left untreated, Legionnaires’ disease can result in death. If you think you may have been exposed to Legionella bacteria, you should consult a medical professional immediately, especially if any symptoms are present.

We have developed a comprehensive web-based reporting format indicating, in an easy to read graphical format, the number of colony-forming units for Legionella at a water system. Contact us to test any water sources that you suspect may be contaminated by Legionella bacteria. You can reach SanAir Technologies Laboratory by dialing (804) 897-1177.